Last weekend, I afforded myself some relief from the arduous processes of dissertation-writing and job-hunting with a short trip into deepest Wallonia.  The pleasant Belgian town of Mons, a European Capital of Culture this year, is host to a number of museums, galleries and historic buildings, including the Mundaneum—the remains of Paul Otlet’s utopian project to create a world city underpinned by the free and direct access to, and dissemination of, information presented in a museum that showcases his life’s work. Although this visit was not strictly necessary to support my dissertation, as the resources that I require are all available either online or through the British Library, it was nevertheless fascinating to see original copies of many of Otlet’s explanatory posters and graphics, and of course numerous sections of the Répertoire bibliographique universel—Otlet’s enormous card-catalogue index of bibliographic references. I also had some productive discussions on a number of subjects with three like-minded individuals who were also visiting the museum.

The Mundaneum’s central atrium; the universality of the project is indicated by the prominent globe.

The Mundaneum’s exhibits are spread across three floors, illuminated just to the level of hushed reverence. The displays consist of sections of the catalogue and selections of Otlet’s drawings on various subjects (which are also available online through the Google Cultural Institute; Google operates one of its data centres nearby), not just limited to library and information science, but also including works on network theory, the nature of international associations, pacifism, and utopian visions of his never-realised World City. 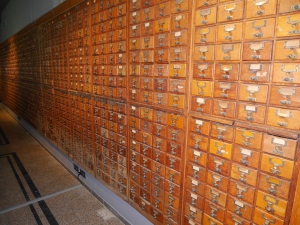 A large section of the Répertoire bibliographique universel.

Perhaps surprisingly, each individual drawer can be opened to reveal its original contents. 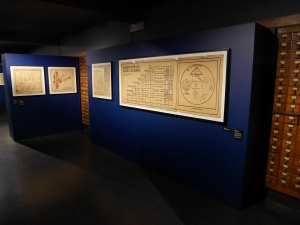 Sections of the RBU are juxtaposed with examples of Otlet’s graphical output.

Of particular interest to my research into predictions of future information technology was a full-scale realisation of Otlet’s Mondothèque, an analogue anticipation of the digital desktop computer.

Otlet’s original drawing is framed above the modern construction.

Otlet’s work is also placed in its historical context by the display of previous attempts to organise human knowledge—some of which I referred to in this previous blog post on the history of encyclopaedias—in addition to a timeline that charts advances in statistics and abstract forms of data visualisation, as people have sort to record knowledge in ever-more accurate, intuitive ways.

The museum’s exhibits, furthermore, extend beyond Otlet’s lifetime, and include a plethora of examples of subsequent data visualisation enabled by the development of computer network technology in the form of the Internet—arguably the modern realisation of Otlet’s dreams. These later displays include visualisations on serious subjects such as global inequality and climate change, but also art inspired by data visualisation. I was particularly taken by this French-produced music video for the song “Remind Me” (2002) by the Norwegian group Röyksopp, which breaks down the events of a single person’s normal working day into its constituent quantitative data through a unrelenting procession of infographics:

Can you see the central black grain?

This exhibit reminded me greatly of scale models of the Solar System, and in my experience the vast emptiness of space is as similarly difficult to comprehend as the current information explosion, which philosopher of information Luciano Floridi has characterised as “The Fourth Revolution“, comparable to the advances in human understanding achieved by Copernicus, Darwin and Freud.

All in all, the Mundaneum was an extremely interesting place to visit, and I would thoroughly recommend a trip to Mons to anyone interested in the subject.

Paul Otlet lives on, almost literally, through his work and writings. 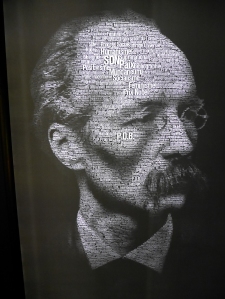 …as does his close friend and long-term collaborator, Henri La Fontaine.